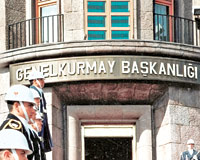 Taraf's story comes at a time when the Constitutional Court is at loggerheads with the Justice and Development Party (AK Party) government. Last month the court annulled a bill sponsored by the AK Party that would have allowed the Muslim headscarf to be worn on university campuses. The upper ranks of the Turkish judiciary, and the Constitutional Court in particular, has opposed government-sponsored bills since the ruling party first came to power in 2002. The court is currently hearing a closure case filed in March by the top prosecutor of the Supreme Court of against the AK Party over alleged "Islamist" activities. In addition to shutting down the AK Party, the prosecutor seeks to ban 71 of its former and current members from party politics for the next five years. Meanwhile, the General Staff released a statement on Friday afternoon denying Taraf's report. "There is no such official document approved by the commanding ranks in General Staff records," it said.

The document defines its goal as: "Bringing public opinion into line with the TSK on issues the TSK is sensitive about, preventing the development of incorrect opinions about the TSK, ensuring the unity and solidarity of opinions and actions within the TSK." The same introductory chapter issues a caveat, stressing the need to avoid, "conflict with other state agencies" and relaying "the image of intervening in daily politics."

The plan also emphasizes it is necessary to "bring universities, presidents of the higher judiciary, press members and artists into line with the TSK because they have the power to foment public opinion, and to ensure that these individuals act in the same way as the TSK."

Of note is a secret meeting between Constitutional Court Justice Osman Paksüt and Land Forces Commander Gen. İlker Başbuğ, also recently exposed by Taraf. The plan claims the AK Party government and its municipalities are organizing activities to spread an Islamic lifestyle in society. The document also defines a new constitution drafted by the AK Party as against the idea of "nation-state." According to the action plan: "The government is continuing to effectively use all the legitimate means of democracy, such as schools, dormitories, companies, associations and the media, in organizing and shaping the society. It is also known that Islamist centers have gone a significant distance in hiring their own in state institutions." The document also said the public had to be shown that the TSK was not against religion and that for the TSK, "religion is a necessary institution."

The plan also includes a schedule. The names of individuals and organizations the army decided to work together with have been withheld in the plan, but they are frequently referred to by the usage of expressions such as, "trustworthy names," "civil society organizations," "the proper media organs," or "those who have similar opinions to the TSK."

The plan also seeks to protect the nation's unity against the pro-Kurdish Democratic Society Party (DTP) and help the military maintain its role as a "leader of the society." Since independent deputies from the DTP entered Parliament in July last year, the General Staff has refused to invite DTP deputies to their events and does not attend events DTP representatives participate in.

The action plan includes hard-line suggestions for handling the Kurdish issue including, "Showing the people of the region that supporting the terrorist Kurdistan Workers' Party [PKK] does not come without a price." Another suggestion is to carry out "heavy artillery fire" on northern Iraqi residents.

Some of the most shocking highlights of the document include: "Supporting some individuals in groups against the TSK; support separation in political and ethnic groups and destroy unity in such organizations. Exhausting in the public's eye those artists and authors known for their anti-TSK opinions. Having proper composers and artists, overtly or covertly, create music and songs in line with the opinions the TSK defends."

Other plans of the TSK include using national security classes, taught in high school in Turkish schools, as an opportunity for "promotion of the TSK and explaining national values." Handing out books, CDs and DVDs about the TSK during these classes was also suggested in the plan.

In the meantime, in a statement released yesterday, the Free Thought and Education Rights Association (Özgür Der) condemned the action plan, terming it evidence of how Turkey is under a stifling military siege. "The military's Information Support Activity Action Plan reflects a fascist mentality that aims to control all of social life, from the judiciary to politics and the arts," the statement said.

Özgür Der noted that the Turkish military persisted in attempts to meddle in politics despite the heavy blow the institution was dealt with the results of the July 22 elections. The ruling AK Party garnered 46.6 percent of the vote, despite the military's having tried to intervene in politics by releasing a memorandum strongly criticizing the government earlier that year.

The president of the Advocates of Justice Association (ASDER) retired Brig. Gen. Adnan Tanrıverdi, said the military's attempt to shape internal politics and deeming the government, Parliament and the majority of the public a threat, may drag the country into chaos.

"The General Staff denied the existence of the said document, but I don't believe such a detailed document can be faked. It (the General Staff) previously denied the existence of similar documents related to failed coup attempts called Ayışığı and Sarıkız, but their existence was later proven. The government and Parliament should examine the allegations regarding the military's plan of action to intervene in politics and civilian life and should do what is necessary to prevent such interventions," he said. 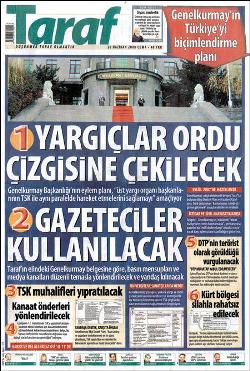 MAZLUM-DER to go to European court
The Association of Human Rights and Solidarity for Oppressed Peoples (MAZLUMDER) announced yesterday in a press statement that it will go to the European Court of Human Rights to file a complaint seeking an investigation into claims published by the Taraf daily. "The two heads, one civilian and one military, present in the judicial system prevent the meting out of justice in society. As MAZLUM-DER, we believe that until there is effective judicial reform in Turkey, there is no judicial system to investigate claims independently and objectively. In light of the present situation and considering our previous cases [which yielded no results], we will not submit a petition to the court again. We wish to inform the public that we will file a petition with the European Court of Human Rights, which Turkey and the Turkish Constitution recognize."
Meanwhile, the pro-Kurdish Democratic Society Party (DTP) invited Parliament, the public and political parties that support democracy to fight against undemocratic forces.
"The General Staff, with its statement, acknowledges the existence of such a plan. In its explanation, it says, 'There is no such official document approved by the commanding ranks in the records of the General Staff.' With this they do not deny that there is no such plan but express that there was no such official document. Indeed, such illegal documents have never been approved by the 'commanding ranks'."
Speaking to Today's Zaman, retired military judge and prosecutor and acting lawyer Ümit Karda? said in a "normal, democratic country" the government would question the General Staff upon such reports and have it investigated.
"But the ruling party faces a closure case; the prime minister and the president face a ban from politics. Therefore, the political and judicial systems have been taken over. We have a deep military guardianship," Kardaş said.